For the generation of build environment specific build configuration files, the Cross-platform Make tool named CMake is needed. The minimum required version for Linux and OS X is 2.8.12, while version 3.4 or newer is needed on Windows.

For the compilation of the MIRTK source code, a C++ compiler with support for the C++11 standard is required. On Windows, the minimum required Visual Studio compiler version is 18.0. A compatible compiler is shipped with Visual Studio 2013 or newer. For Unix operation systems, we recommend the use of the GNU Compiler Collection (GCC).

To execute the MIRTK commands, a Python installation is required. Note that Python has to be installed before configuring the MIRTK build using CMake.

The MIRTK source code makes use of the following third-party libraries:

Boost and Eigen are a minimum requirement to build MIRTK. The source code of the NiftiCLib and libLBFGS libraries are included in the basic download package and need not be installed. The WITH_NiftiCLib build option can be used, however, to force the use of an existing NiftiCLib installation. See build configuration steps below.

The UMFPACK library is part of the SuiteSparse installation.

The intra-module dependencies are as follows. When a module is enabled, all modules required by this module are automatically enabled as well.

Notice that the I/O module is required only by the Applications which read/write images or point sets.

For a complete list of module dependencies, see the BasisProject.cmake file and in some cases also the config/Depends.cmake file if present in the respective module directory.

After obtaining a copy of the MIRTK source files, generate the build configuration files for your build tool of choice using CMake. We recommend the use of the CMake GUI with the “Grouped” checkbox enabled. Advanced options should normally not be required to be modified.

An example screenshot of a CMake configuration is shown below. 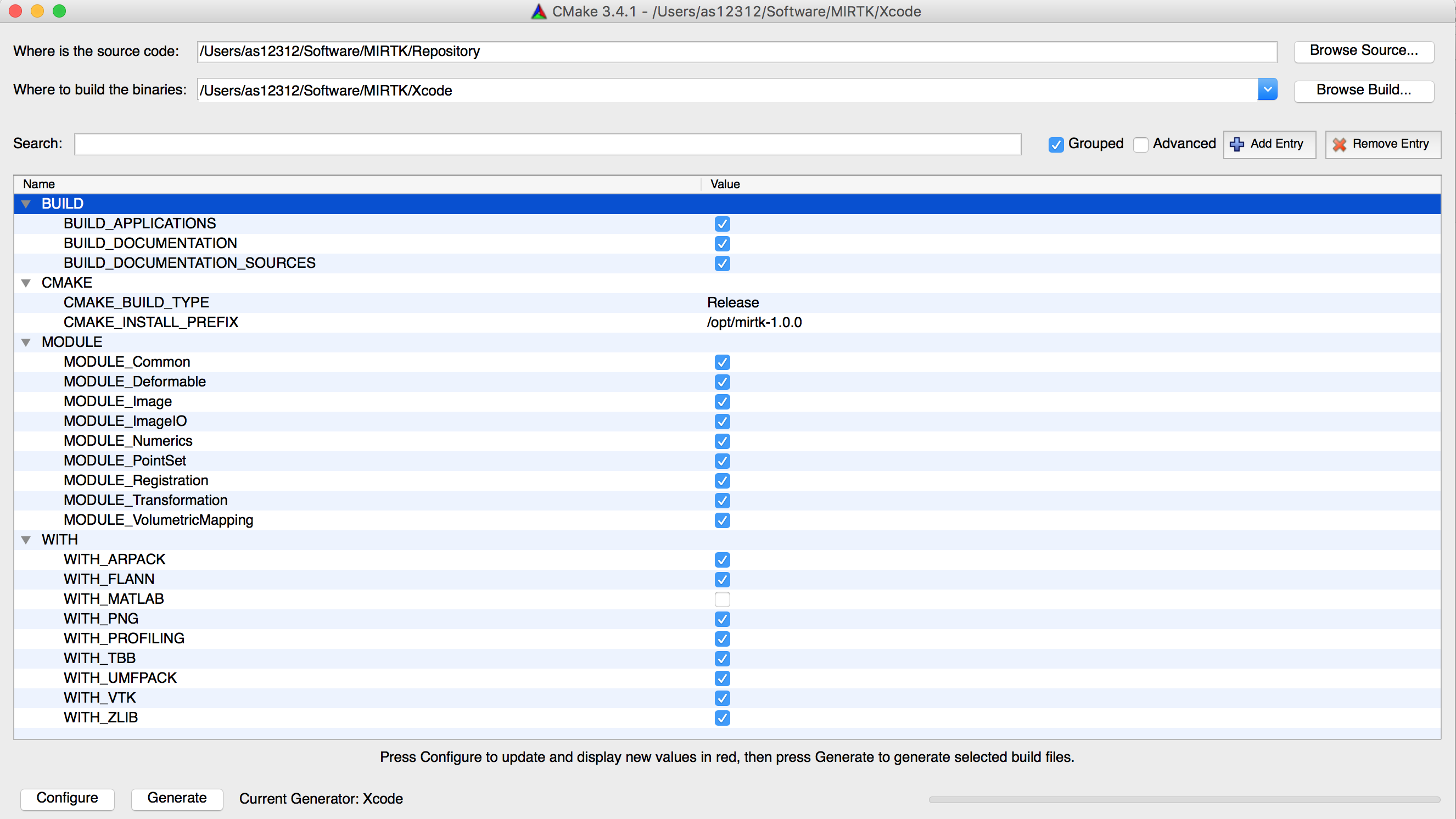 Enabling a module may require additional external libraries or add further WITH options. The location of required external libraries is specified by the DEPENDS family of variables. These are marked as advanced and hence hidden from the default view when an installation of the external library was found automatically. To see which external libraries the MIRTK will be linked with, enable the “Advanced” checkbox at the top of the CMake GUI.

When a build dependency such as VTK, for example, was not found, a DEPENDS variable becomes visible in the GUI (i.e. not marked as advanced) which must be set to either the installation prefix of the dependency or the directory containing a CMake package configuration file (e.g., VTKConfig.cmake). See the following screenshot for an example where VTK was not found automatically and the path to the VTKConfig.cmake file in the VTK build directory was set manually after the error was reported. 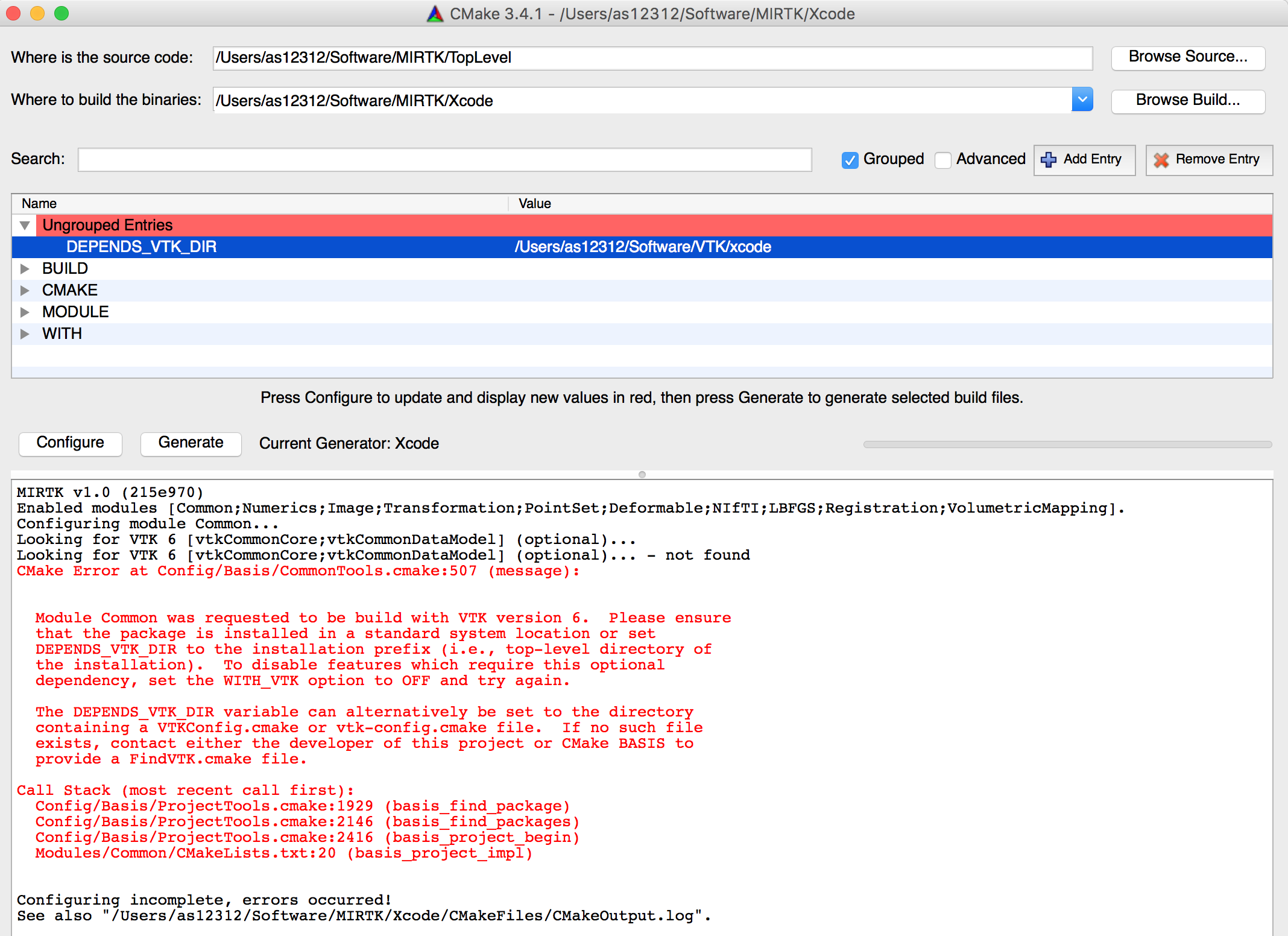 After the configuration files for the chosen build tool were generated by CMake, open the corresponding project file in case of an IDE such as Xcode or a Terminal window in case of the GNU Make or Ninja build tools to build the MIRTK.

The following assumes the build directory to be located at,

When BUILD_DOCUMENTATION was set to ON during the build configuration, the documentation files can be build (before installation!) using the “doc” target.

After the successful build of the MIRTK, the software can be installed by building the “install” target.

To enable the convenient use of the Applications, it is recommended to permanently add the $MIRTK_ROOT/bin directory to the PATH environment variable in the shell configuration file (e.g., $HOME/.bashrc or $HOME/.bash_profile), where MIRTK_ROOT is the directory chosen as CMAKE_INSTALL_PREFIX above.

The MIRTK installation further includes a Bash completions script which when sourced in your Bash configuration file, enables auto-completion of available MIRTK commands for the mirtk command. To enable the MIRTK Bash completions, add the following lines to $HOME/.bashrc (Linux) or $HOME/.bash_profile (OS X):

The Bash completions are then available when a new Terminal window is opened.